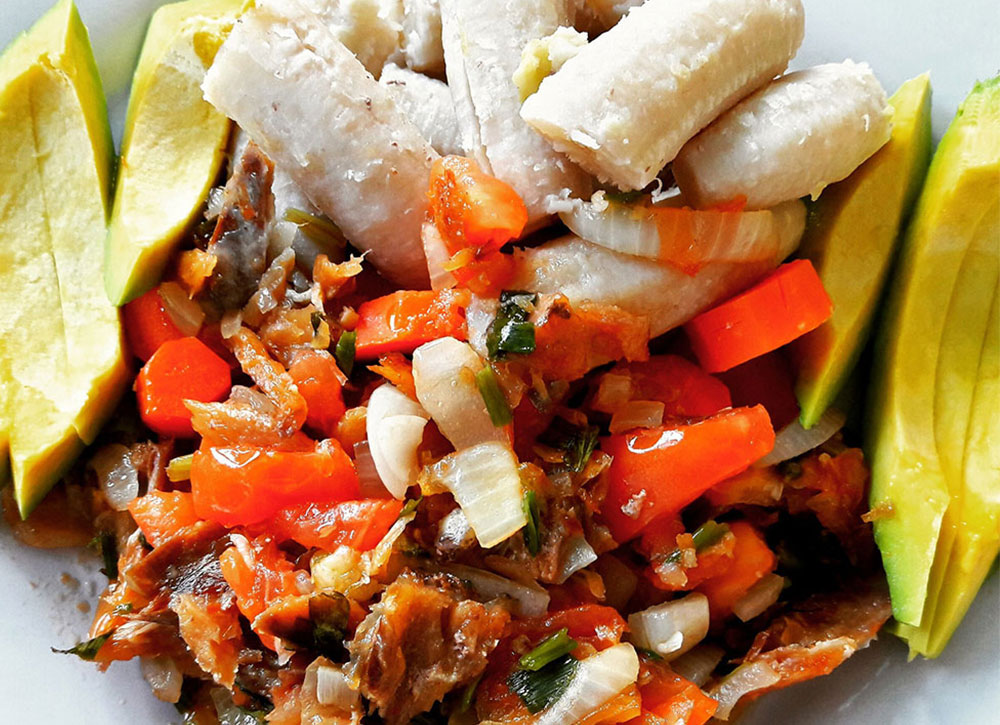 Saint Lucia's national dish is green figs (banana) and saltfish, which is pictured above.

A popular breakfast dish in the Windward Isles, saltfish accras are fried fish cakes made from salted cod and mixed spices. These crispy, spicy delights are often seasoned with scotch bonnet pepper and served for breakfast in Saint Lucia. You might not be used to this much heat in the morning but it’s a great wake up call. Breadfruit is a classic staple of St Lucian cuisine and a memorable tropical flavor. Breadfruits are quite like potatoes but have a sweeter, starchier taste. They are served in many different ways: stuffed, boiled, and even cooked in a pie. If you don’t think you’re quite ready for a pie, try some fried breadfruit with your main meal. Dipped in some mayonnaise or a spicy sauce these golden brown delights are a delicious treat. Breadfruit is high in fiber, which can lower your blood pressure and cholesterol. This Saint Lucia favorite is also high in Vitamin C and potassium.

One of the most accessible expressions of Saint Lucia's rich cultural heritage is its cuisine. The fertile, volcanic soil of the island yields an enormous supply of produce, and the island is one of the leading banana exporters in the Caribbean, with six different varieties available. In addition to bananas, St Lucia's abundant tropical fruits include mangoes, papayas, pineapples, soursops, passionfruit, guavas, and coconuts. Local chefs combine the island's fresh produce with a wide variety of equally fresh seafood to create tantalizing curries, Creole-style entrees, and pepper pot stews. Callaloo soup, made from a leafy green similar to spinach, is the national dish. The island's outstanding cuisine has recently gained international recognition by garnering several gold medals in the region’s most prestigious culinary competitions.

The carefree island culture on St Lucia is complemented by the island’s cuisine, which never gets too fussy. Fried plantain can be eaten on its own or as a side dish served with other delicacies from the island. They are perfect for a snack in the afternoon if you are lazing on the beach. Local chefs tend to fry them in a little bit of coconut oil and season them with salt before serving. Plantain is a true staple of the Caribbean and you’ll find it served in lots of different guises on your tip to St Lucia. This Caribbean favorite is a spinach-like soup made from the leaves of the leaf vegetable Callaloo, which is abundant in St Lucia. The recipe originated in West Africa and combines the Callaloo leaf with seasoned meat, garlic, potatoes, onions, okra and coconut milk. Variations on the traditional recipe might include crab, conch and fresh St Lucia lobster. It seems like there are almost as many different takes on Callaloo soup as there are cooks in the Caribbean!

Seafood is always in season

The coast around St Lucia sustains an abundance of fresh fish and shellfish, which the restaurants on the island love to showcase. Some are even caught by local divers using nothing more than a snorkel and a hand spear. Lobsters caught in the Caribbean are quite different from UK lobsters – they are spiny with large tails and long pointed barbs instead of claws. You will find many restaurants serving this delicacy, with recipes ranging from steamed lobster tails to lobster ceviche and even spiny lobster sushi.

Saint. Lucia offers a variety of food options to suit just about any palate, from the gourmet to the gourmand or the mac-and-cheese-addicted child. Freshly-caught fish and seafood abound, combined with locally-grown seasonings, vegetables and traditional Caribbean preparations, making for healthy, delicious, and unique culinary experiences. Some popular dishes are found in different forms on other Caribbean islands, but Saint Lucia puts its own twist on food. Even if you think you know what Callaloo or Shark & Bake tastes like, you haven't tried it until you've tasted it here.

Do Not forget to try to rum punch

The Caribbean is famous for its incredible rums, which are exported all over the world. The sweet spirit is an important part of the cultural life of the islands. Each Caribbean Island tends to have a particular style of rum that can be guessed by the language spoken there. The English speaking islands and countries – including Saint Lucia – are known for darker rums with a fuller taste. For a summery variation on the traditional rum flavor, try a glass of Saint Lucian rum punch. Made with orange juice, lime juice, angostura bitters, cinnamon, nutmeg and rum, this moreish cocktail goes down easy. St Lucian rum punch is the perfect accompaniment to a Saint Lucia barbecue on the beach. Tempted to try some of this tempting Saint Lucia food and drink? Saga offer a variety of holidays to Saint Lucia from relaxing hotel stays to tours that take in the wider Caribbean.

Get into the island spirit by imbibing perhaps the most tropical of beverages, coconut water, drank directly from the split husk of the fruit. Fresh fruit juices are also great thirst quenchers, and particularly tropical feeling. Sodas, coffees, and teas are easily accessible on the island, so you can find comfort and familiarity. Straight up, on the rocks, or mixed into a fruity cocktail, rum is a popular alcoholic beverage on St. Lucia, and the island is home to its very own distillery. Piton is a top local beer, and coffee liqueurs are favorites. To really drink like a local, try a "shandy," a drink mixed with beer, ginger ale, lemon, or sorrel. Travelers can cater to their own culinary tastes and budgets on St. Lucia. Whether the evening dinner brings with it relaxation or excitement, many of the locals treat dinner as the optimal time for simply relaxing and hanging out with friends.