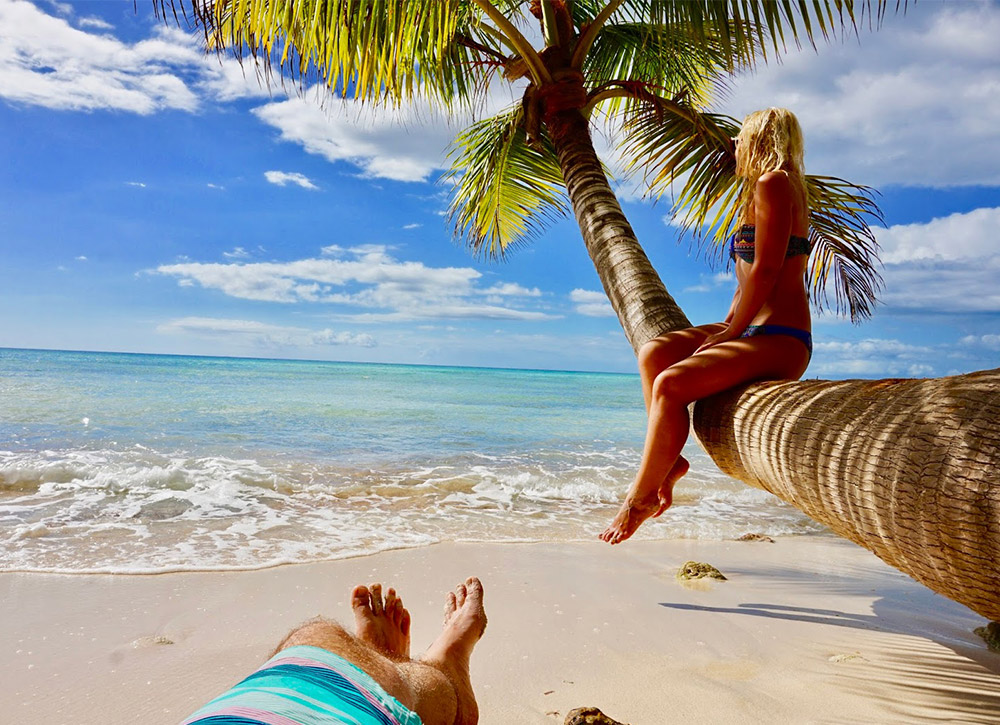 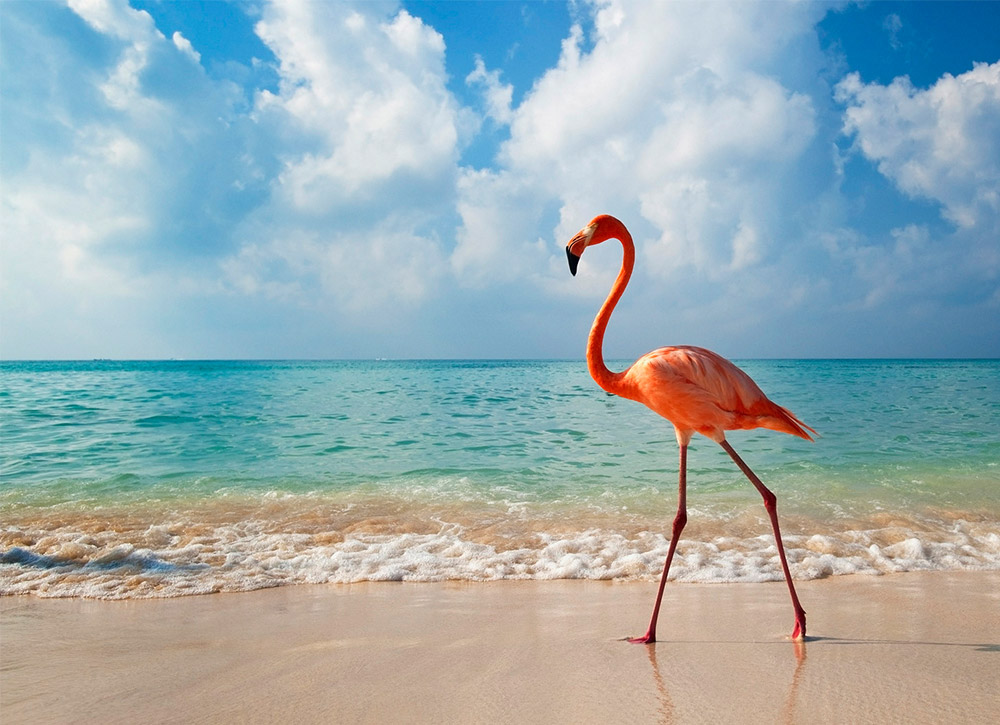 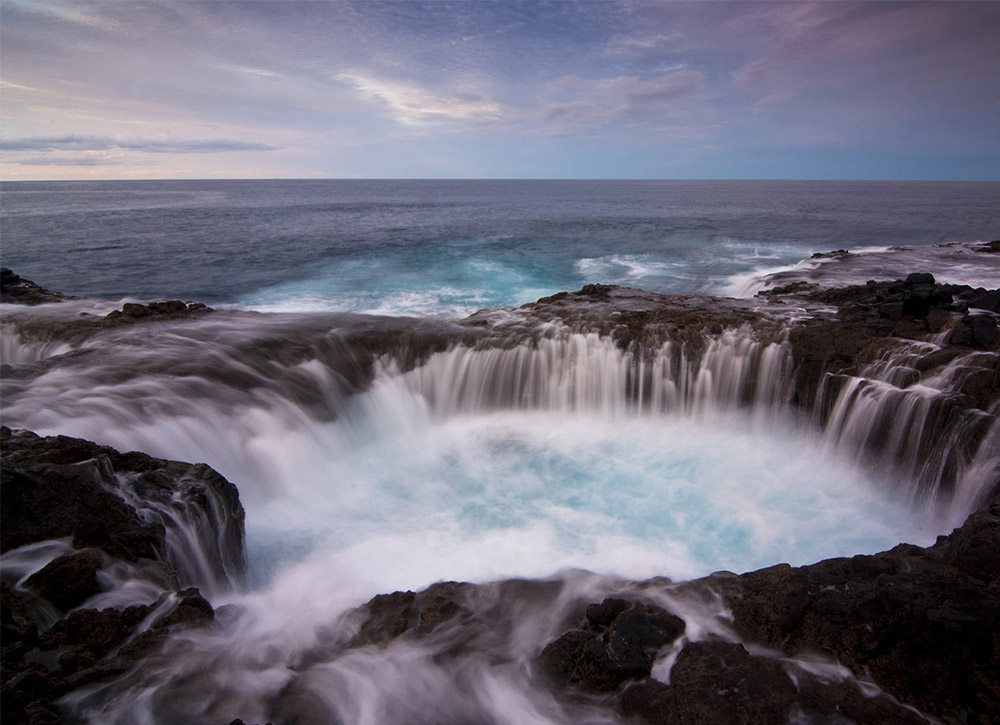 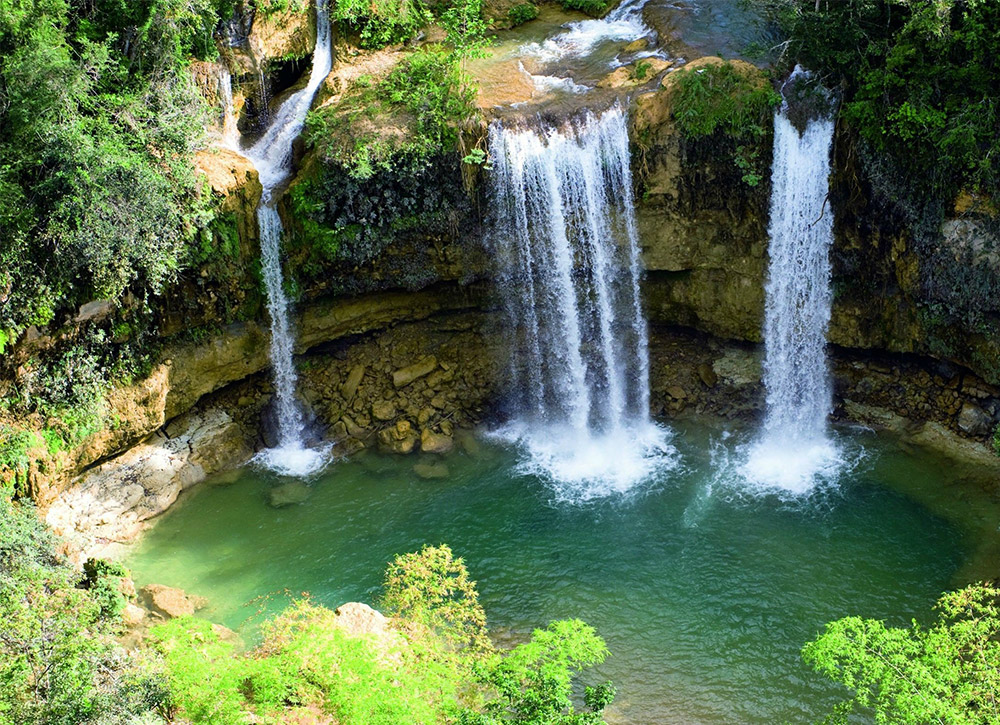 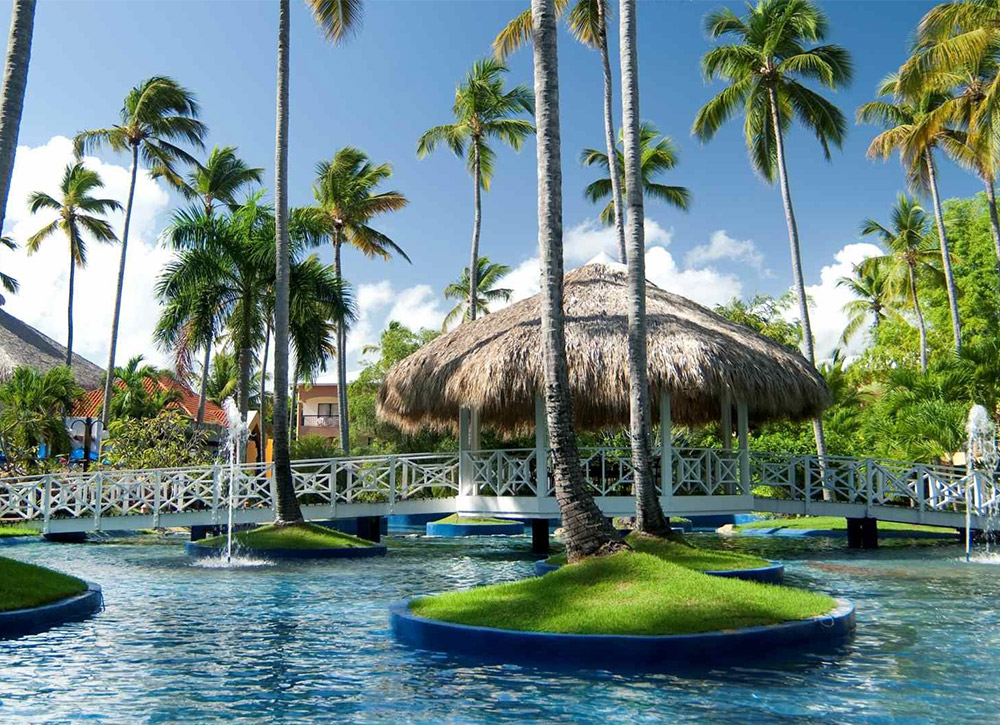 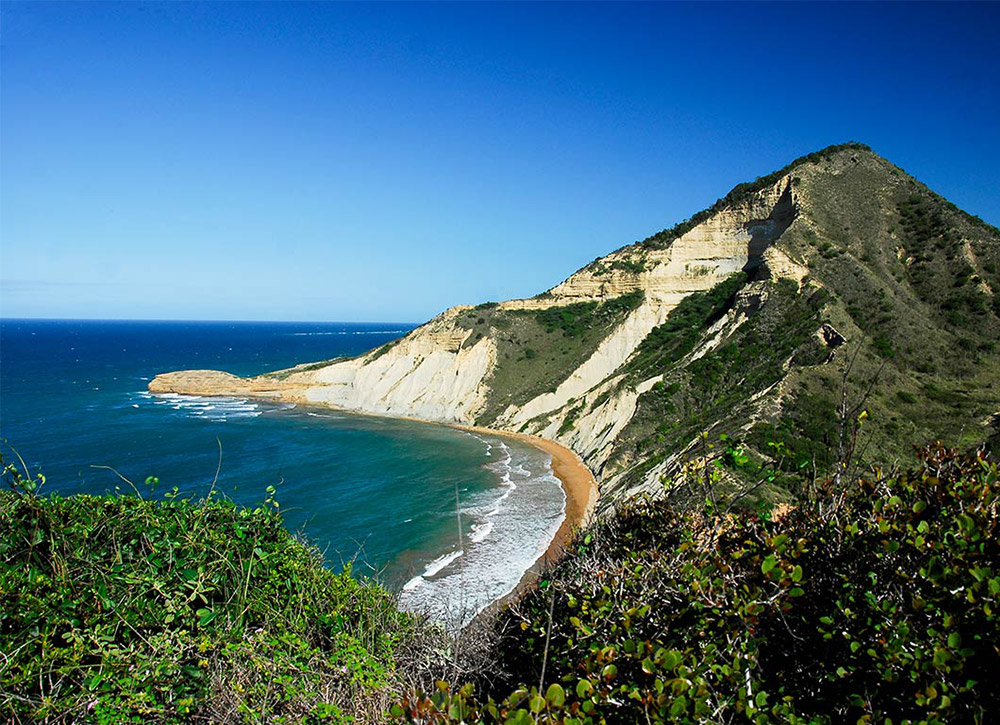 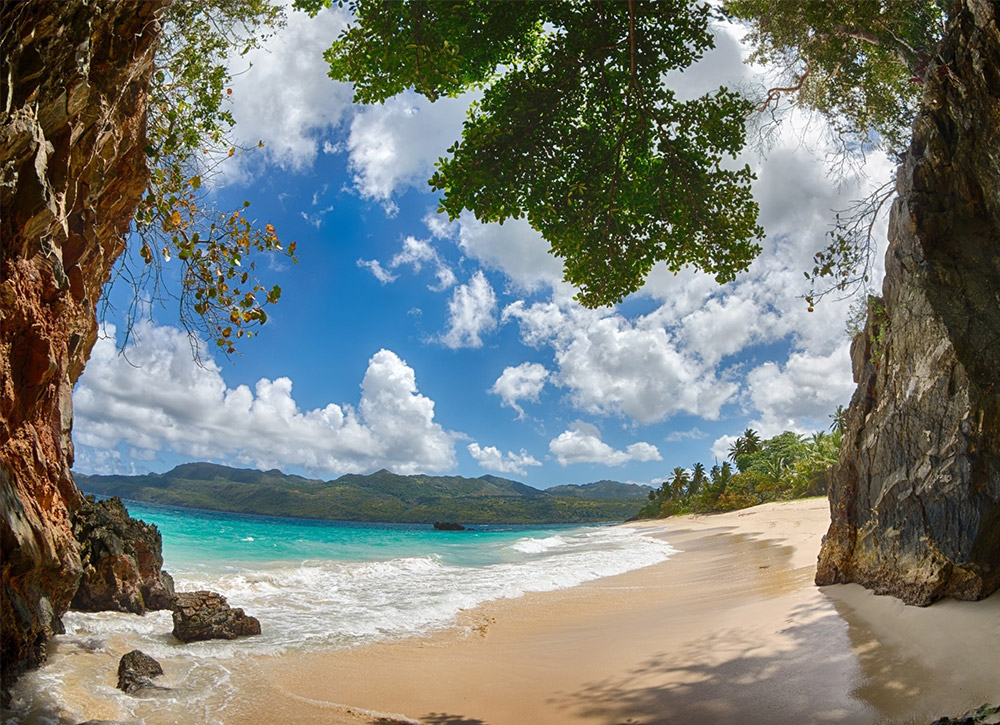 Guide to The Dominican Republic

The Dominican Republic (Spanish: República Dominicana Spanish pronunciationis a country located in the island of Hispaniola, in the Greater Antilles archipelago of the Caribbean region. It occupies the eastern five-eighths of the island, which it shares with the nation of Haiti, making Hispaniola one of two Caribbean islands, along with Saint Martin, that are shared by two sovereign states. The Dominican Republic is the second-largest Caribbean nation by area (after Cuba) at 48,445 square kilometers (18,705 sq mi), and third by population with approximately 10 million people, of which approximately three million live in the metropolitan area of Santo Domingo, the capital city. Dominican Republic is the second largest and most diverse Caribbean country, situated just two hours south of Miami, less than four hours from New York and eight hours from most European cities. Known for our warm and hospitable people, Dominican Republic is a destination like no other, featuring astounding nature, intriguing history and rich culture.

The Dominican Republic has the ninth-largest economy in Latin America, is the most visited destination in the Caribbean and is the largest economy in the Caribbean and Central American region. Over the last two decades, the Dominican Republic has had one of the fastest-growing economies in the Americas – with an average real GDP growth rate of 5.4% between 1992 and 2014. GDP growth in 2014 and 2015 reached 7.3 and 7.0%, respectively, the highest in the Western Hemisphere. In the first half of 2016 the Dominican economy grew 7.4% continuing its trend of rapid economic growth. Recent growth has been driven by construction, manufacturing, tourism, and mining. The country is the site of the second largest gold mine in the world, the Pueblo Viejo mine. Private consumption has been strong, as a result of low inflation (under 1% on average in 2015), job creation, as well as a high level of remittances.

The Dominican Republic has a tropical rainforest climate in the coastal and lowland areas. Due to its diverse topography, Dominican Republic's climate shows considerable variation over short distances and is the most varied of all the Antilles. The annual average temperature is 25 °C (77 °F). At higher elevations the temperature averages 18 °C (64.4 °F) while near sea level the average temperature is 28 °C (82.4 °F). Low temperatures of 0 °C (32 °F) are possible in the mountains while high temperatures of 40 °C (104 °F) are possible in protected valleys. January and February are the coolest months of the year while August is the hottest month. Snowfall can be seen in rare occasions on the summit of Pico Duarte.

The Dominican Republic is situated on the eastern part of the second largest island in the Greater Antilles, Hispaniola. It shares the island roughly at a 2:1 ratio with Haiti. The country's area is reported variously as 48,442 km2(18,704 sq. mi) (by the embassy in the United States) and 48,730 km2 (18,815 sq. mi), making it the second largest country in the Antilles, after Cuba. The Dominican Republic's capital and largest metropolitan area Santo Domingo is on the southern coast. There are many small offshore islands and cays that are part of the Dominican territory. The two largest islands near shore are Saona, in the southeast, and Beata, in the southwest. To the north, at distances of 100–200 kilometers (62–124 mi), are three extensive, largely submerged banks, which geographically are a southeast continuation of the Bahamas: Navidad Bank, Silver Bank, and Mouchoir Bank. Navidad Bank and Silver Bank have been officially claimed by the Dominican Republic.

The Dominican Republic has four important mountain ranges. The most northerly is the Cordillera Septentrional ("Northern Mountain Range"), which extends from the northwestern coastal town of Monte Cristi, near the Haitian border, to the Samaná Peninsula in the east, running parallel to the Atlantic coast. The highest range in the Dominican Republic – indeed, in the whole of the West Indies – is the Cordillera Central ("Central Mountain Range"). It gradually bends southwards and finishes near the town of Azua, on the Caribbean coast.

things to do in the dominican republic

Surrounded by the Atlantic Ocean on the north and the Caribbean Sea on the south, our lush tropical island paradise boasts nearly 1,000 miles (1,609 km) of coastline, 250 miles (402 km) of the world’s top beaches, magnificent resorts and hotels, and a variety of sports, recreation and entertainment options. Here you can dance to the pulse pounding thrill of the merengue, renew in our luxurious and diverse accommodations, explore ancient relics of centuries past, delight in delicious Dominican gastronomy or enjoy ecotourism adventures in our magnificent national parks, mountain ranges, rivers, and beaches.

Discovered in 1492 by Christopher Columbus, the country overflows with fascinating history, museums and exciting cultural experiences like music, art and festivals, plus uniquely Dominican specialties such as cigars, rum, chocolate, coffee, merengue, amber and larimar.

The #1 destination for golf in the Caribbean and Latin America, Dominican Republic delights visitors with 25 designer golf courses amid breathtaking coastlines with mountain backdrops and lush green fairways. With so many beautiful natural settings like romantic waterfalls, breathtaking coasts and idyllic accommodations, Dominican Republic is a top destination for weddings and romance. Many world class-resorts and hotels also cater to meetings and incentive groups who flock to Dominican Republic for excellent, friendly service and dynamic meeting venues.

Dominican Republic offers a fantastic combination of environments to capture your imagination and refresh the soul. And with eight international airports, paradise has never been easier to explore. We invite you to discover our breathtaking island sanctuary and create memories that will last a lifetime.

Blessed with one of the Caribbean region’s longest white sand coastlines–a whopping 48 kilometers (30 miles), punctuated with sky-reaching coconut palms–Punta Cana is the land of rest and relaxation by the sea. Here, where the Atlantic meets the Caribbean, from the northern tip at Uvero Alto to the southern at Cap Cana, all-inclusive resorts and boutique hideaways offer all the whims and comforts of modern beachfront living. Families enjoy miniature entertainment centers and water parks for children, while couples-only enclaves boast dream wedding locations, with secluded beachside lodging for an ultra-romantic stay. But it’s not only about fun in the sun, soft sand brushing against your toes, and iridescent, clear water to swim in, go fishing, or dive for underwater life and shipwrecks. Punta Cana is also a golfer’s destination, with 10 courses located all along the strip, a seaside escape with luxurious marinas and fine dining, and a wellness corner home to the country’s top spas, including the only Six Senses in the Caribbean.

Wherever you settle on this brilliant white Punta Cana coastline–counting 11 Blue Flag certified beaches in its inventory–go beach hopping to enjoy its full splendor. From scenic surf-hub Macao and Bávaro’s hipster beaches Corales and Cortecito–lined with shops, water sports, and beachfront bars–to secluded Juanillo, among others. Spend a day away from the sand and you’ll find a myriad of inland adventures. Cool off in fresh water azure cenotes and lagoons tucked inside forests at Ojos Indígenas and Scape Park, where the family’s tweens can also enjoy ziplines and caving expeditions. Explore the lush Dominican countryside on an off-road safari, tumbling past roadside meat shops, and sugar cane plantations. Along the way, visit the country’s top pilgrimage site at the Basílica Nuestra Señora de la Altagracia, and feel the DR’s deep spiritual roots.

If daytime activities are abundant, nights are no less vibrant. The young at heart can dance the evening away until their feet tire at the DR’s modern nightclubs, while classy evenings under the stars await at marinas and seaside lounges, with cocktails, bites, and hand-rolled cigars.

Punta Cana is the quintessential water, sun, and sand escape.

Punta Cana International Airport (PUJ) is the most-connected airport in the Caribbean and Central America, receiving flights from 26 countries and up to two million passengers a year. Since 2017, the area is also a cruise ship destination thanks to Marina Cap Cana, which now welcomes small luxury cruise ships. By land, the Oscar de la Renta highway, also known as Autopista del Coral, puts visitors less than an hour away from La Romana’s beaches and multiple attractions, and just two and a half hours from Santo Domingo and its Colonial City.