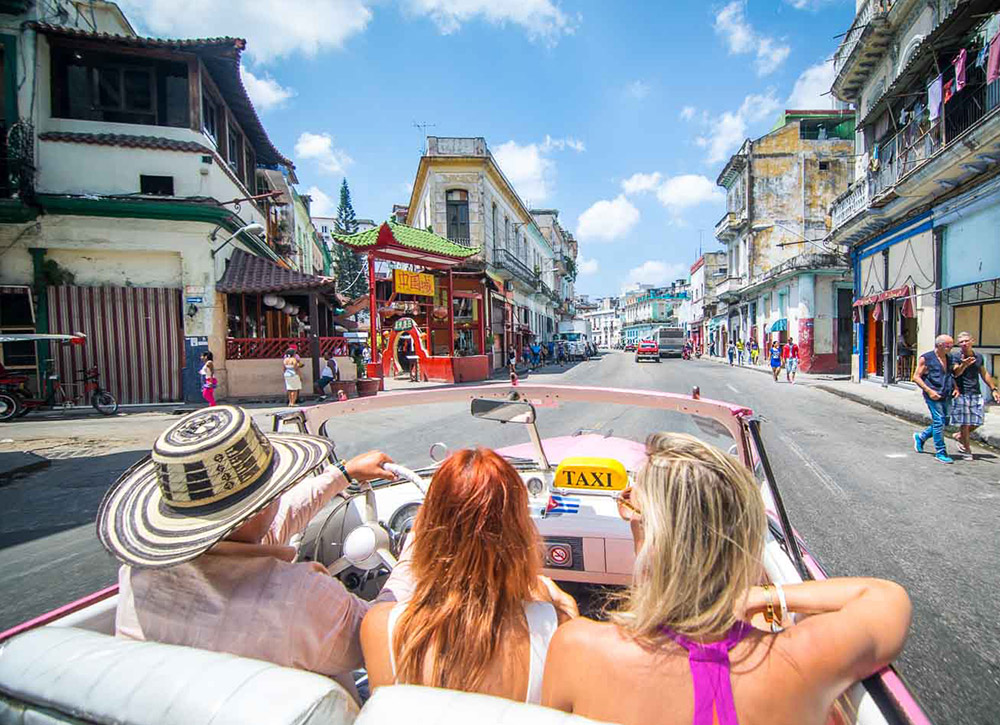 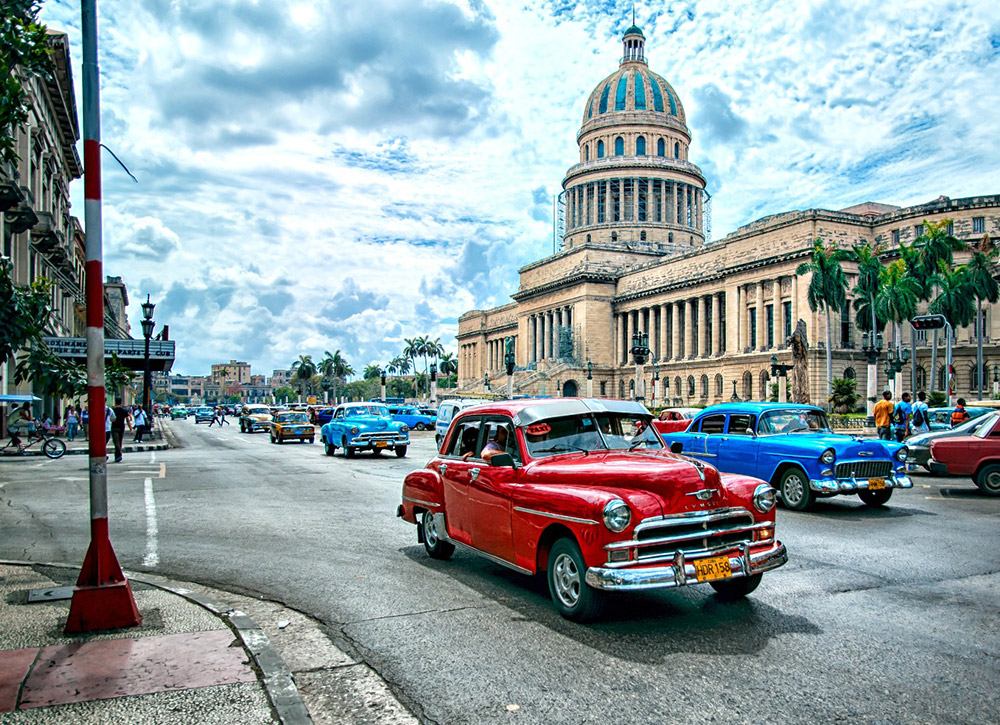 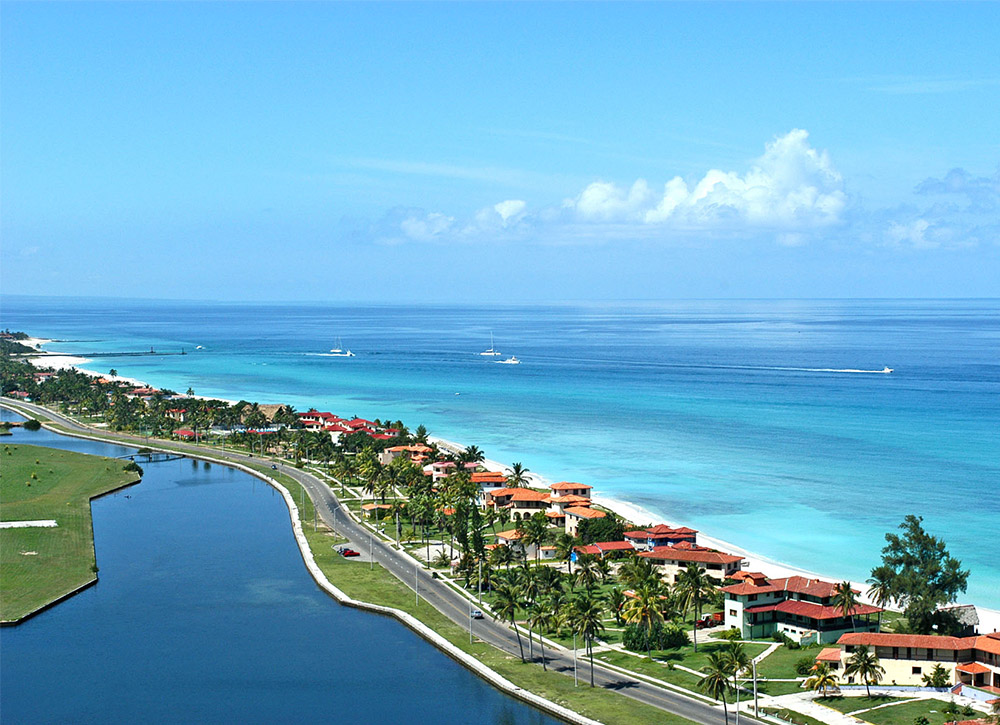 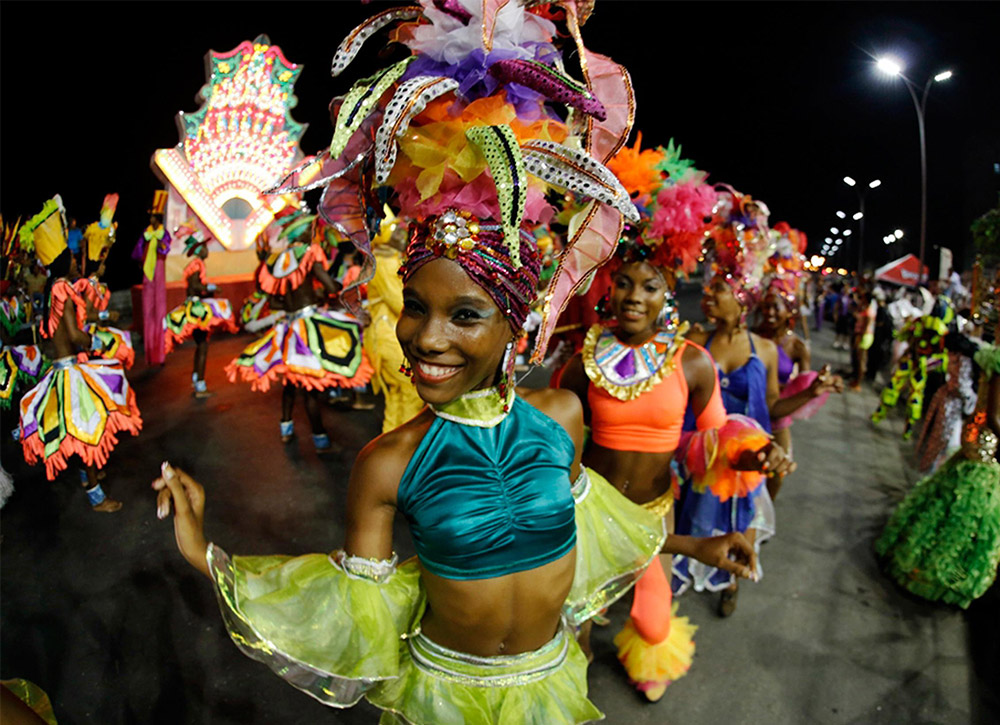 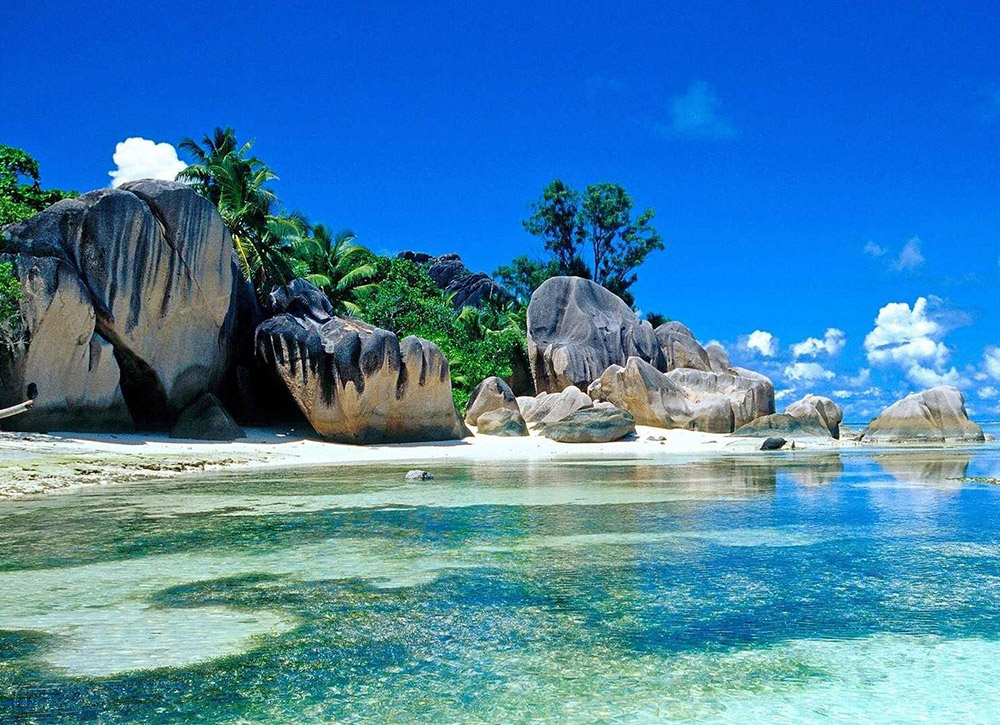 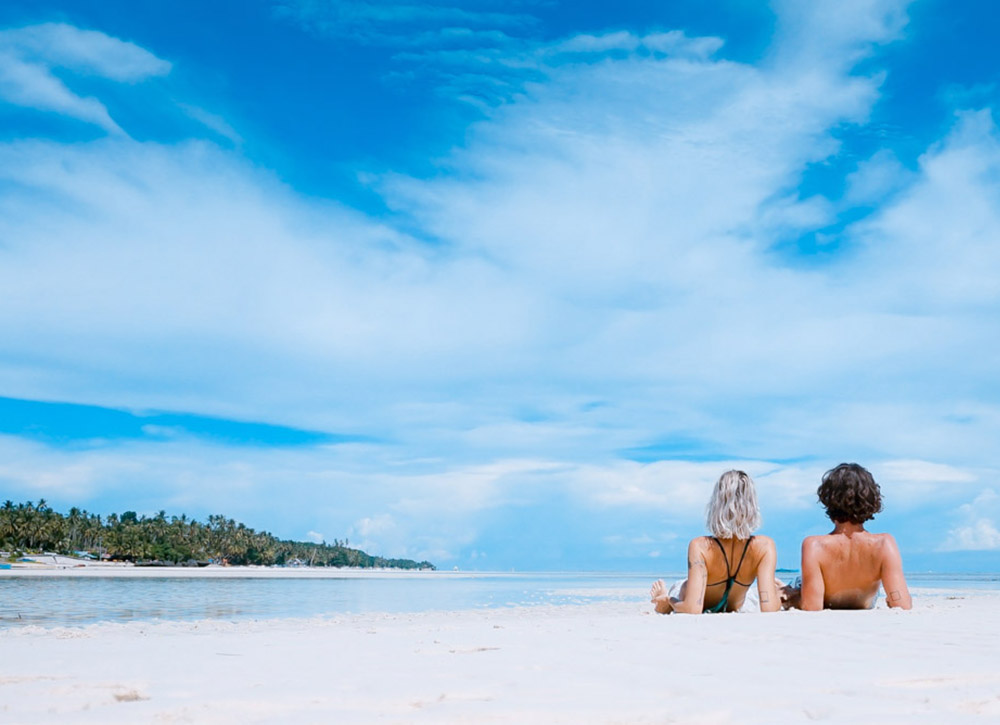 Guide to The Cuba

Cuba is culture, nature, history, magic and traditions. The Pearl of the Antilles is the result of the blend of multiple cultures, fusion of races and customs that gave birth to one of the most unique and fascinating Caribbean destinations. Your trips to Cuba will be characterized by its people. The Cubans are imaginative, joyful, unprejudiced, show their intelligence and are friends of joking and celebrating. And talking about celebrations, now that you’re here you won’t want to miss the carnivals, charangas, the parrandas, the countryside parties and the patron saint’s days, when you’ll have the chance of tasting the typical Cuban gastronomy made of Buñuelos, Tamales and Roasted Pig, always accompanied by a good coffee, a Cuba Libre, a Daiquiri, Mojito or Piña Colada drink.

The revolution marks a before and after in the history of Cuba. The triumph of January 1st 1959 meant a new beginning for Cuba and made its culture one of the most prolific ones in Latin America. Cuba excels at dancing, with the world-wide famous National Ballet of Cuba, in literature with authors like Jose Maria Heredia, Jose Marti, Jose Lezama Lima and Alejo Carpentier and practically in every single artistic manifestation, whether theatre, cinema or visual arts. There are two ways to get to Cuba: by air and by sea. The island has 10 international airports and 15 national airports distributed throughout the archipelago; 4 cruise terminals and 15 international marinas complete the logistic infrastructure that eases tourism in Cuba.

Cuba is like a prince in a poor man’s coat: behind the sometimes shabby facades, gold dust lingers. It’s these rich dichotomies that make travel here the exciting, exhilarating roller-coaster ride it is. Trapped in a time warp and reeling from an economic embargo that has grated for more than half a century, this is a country where you can wave goodbye to everyday assumptions and expect the unexpected. If Cuba were a book, it would be James Joyce's Ulysses: layered, hard to grasp, frequently misunderstood, but – above all – a classic. Cuba is an island brimming with vibrant art, soul-stirring music and villages cloaked in charm. Home to nine UNESCO World Heritage Sites and a population as warm and scintillating as its tropical climate and colorful arts, Cuba—once again accessible to American travelers—is a country begging to be explored.

Cuba officially the Republic of Cuba , is a country comprising the island of Cuba as well as Isla de la Juventud and several minor archipelagos. Cuba is located in the northern Caribbean where the Caribbean Sea, Gulf of Mexico and Atlantic Ocean meet. It is south of both the U.S. state of Florida and the Bahamas, west of Haiti and north of Jamaica. Havana is the largest city and capital; other major cities include Santiago de Cuba and Camagüey. The area of the Republic of Cuba is 110,860 square kilometers (42,800 sq. mi) (109,884 square kilometers (42,426 sq. mi) without the territorial waters). The island of Cuba is the largest island in Cuba and in the Caribbean, with an area of 105,006 square kilometers (40,543 sq. mi), and the second-most populous after Hispaniola, with over 11 million inhabitants.

With the entire island south of the Tropic of Cancer, the local climate is tropical, moderated by northeasterly trade winds that blow year-round. The temperature is also shaped by the Caribbean current, which brings in warm water from the equator. This makes the climate of Cuba warmer than that of Hong Kong, which is at around the same latitude as Cuba but has a subtropical rather than a tropical climate. In general, (with local variations), there is a drier season from November to April, and a rainier season from May to October. The average temperature is 21 °C (69.8 °F) in January and 27 °C (80.6 °F) in July. The warm temperatures of the Caribbean Sea and the fact that Cuba sits across the entrance to the Gulf of Mexico combine to make the country prone to frequent hurricanes. These are most common in September and October.

Hurricane Irma hit the island on 8 September 2017, with winds of 260 kilometers per hour, at the Camagüey Archipelago; the storm reached Ciego de Avila province around midnight and continued to pound Cuba the next day. The worst damage was in the keys north of the main island. Hospitals, warehouses and factories were damaged; much of the north coast was without electricity. By that time, nearly a million people, including tourists, had been evacuated. The Varadero resort area also reported widespread damage; the government believed that repairs could be completed before the start of the main tourist season. Subsequent reports indicated that 10 people had been killed during the storm, including seven in Havana, most during building collapses. Sections of the capital had been flooded. Hurricane Jose was not expected to strike Cuba.

things to do in cuba

Cuba has a unique culture that is brimming with history. Visitors can also enjoy beautiful landscapes, many buildings with historical significance, and cultural aspects such as fine cigars and perfumes. Spanning 44,200 square miles, Cuba is filled with rolling farmland, rugged mountains, quaint little villages, urban metropolises, and white sand beaches. It is located just 90 miles off the coast of Key West, Florida. Please be aware of travel restrictions to Cuba for U.S. citizens. Pico Turquino National Park can be found in the Sierra Maestra along southeastern Cuba. Visitors will have a view of large mountains, clean creeks, and thick forests. The hikes to the summit are challenging, possibly some of the most challenging in Cuba. Hikers will pass several rural communities as well as beautiful terrain. Guides are required for a portion of the hike and you may need to stay overnight. There are over 100 plant species in the area as well as some important plants and animals that are protected by the park.

Take a walk on one of the many white sandy beaches in Cuba. One of our favorite beaches in Cuba was Varadero, which is 20km of white sandy coastline. Another off the beaten path beach is Playa Jibacoa, which is only accessible by ca. so for those renting a car put Playa Jibacoa on your list of things to do in Cuba. There are over 200 places on Airbnb in Varadero so finding accommodation is no problem. Jump in a cenote in Cuba and go for a swim to cool down on a hot day in Cuba. Swimming in cenotes is a unique thing to do in Cuba, as there are only a few places in the world that have cenotes. Right outside of Trinidad is a massive nature preserve, Topes de Collantes. The park is full of hiking opportunities and waterfalls to explore. From Trinidad, you can visit the park by horse or there are large 4×4 vehicles that take tourists into the park to the various waterfalls. Tours can be arranged through locals in town, or take one of the big old Russian trucks through the park with Cubatur.

Diving in Cuba is not only really good but super cheap. For about $25 a tank we dove in Playa Giron just past the Bay of Pigs. If you know any Spanish, Cuba is a good place to put it to test. Not everyone in Cuba speaks English and the locals really appreciate you trying to speak Spanish. Don’t go chasing waterfalls, I lie… do go chasing waterfalls in Cuba. Go for a swim in Vegas Grande waterfall while exploring Topes de Collantes. Yum! a Cuban sandwich! Well, the Cuban sandwich you may be accustom to in America is not the same as a Cuban sandwich in Cuba. You’ll just have to add eating a Cuban sandwich to your list of things to do in Cuba and you’ll see what I’m talking about. Cubans are some of the friendliest people we have met traveling. Everyone was willing to help us out when needed and even many just wanted to have a chat with us. Just sit down with a local and hear about their life in Cuba and how excited they are about the future of Cuba. Ask the locals their favorite things to do in Cuba!